Trash Gremlins is a Fifth Edition adventure for three to seven characters of 1st to 2nd level, and is optimized for 4 characters with an average party level (APL) of 1. Characters who survive this adventure should earn half of the XP required to reach the 2nd level.

A pack of dretches slipped into the material plane and nested in a vacant apartment floor. Relieved of their duties in the eternal war by a stroke of luck, they’ve been picking through garbage in a nearby alley for food and getting into fights amongst themselves, inciting noise complaints from the nearby city folk.

You can use the following adventure hooks to key your players up for this adventure.

Exotic Pet. A noble woman with a taste for exotic animals heard a rumor that there are squat, gorilla-shaped creatures with pale, rubbery skin and bristly hairs lurking in the city streets. The noble woman has offered 100 gp for the capture of such a creature so that she may domesticate it.

Noise Complaints. A small group of neighbors have put up a bounty of 50 gp for anybody that can deal with whatever creatures have been trashing the alleyway and fighting in the dead of night.

Questionable Meat. Local food connoisseur Brandar Starglade III offers to pay 50 gp for the characters to investigate the butcher’s shop and the adjacent alley. He believes they’re sourcing meat from the trash. 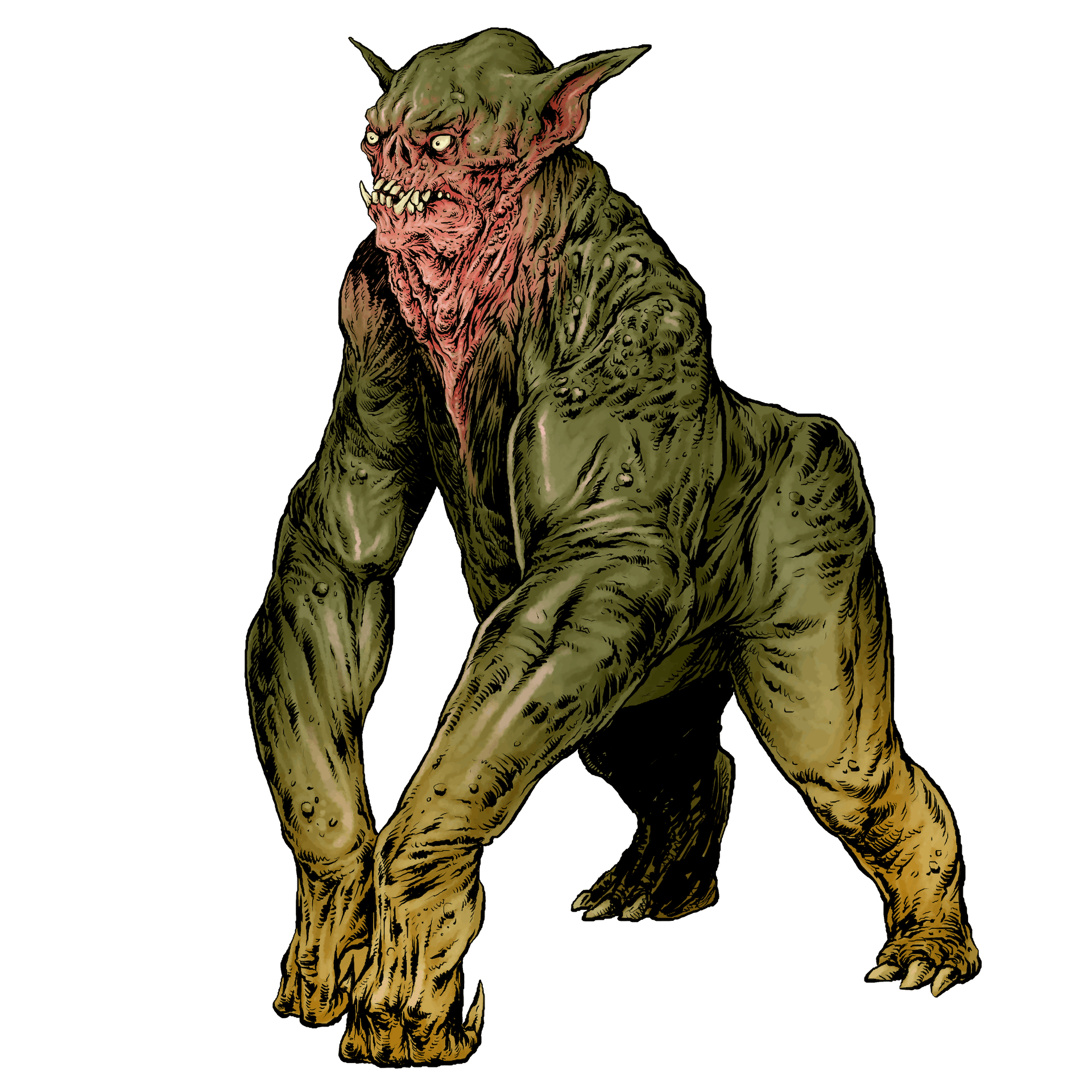 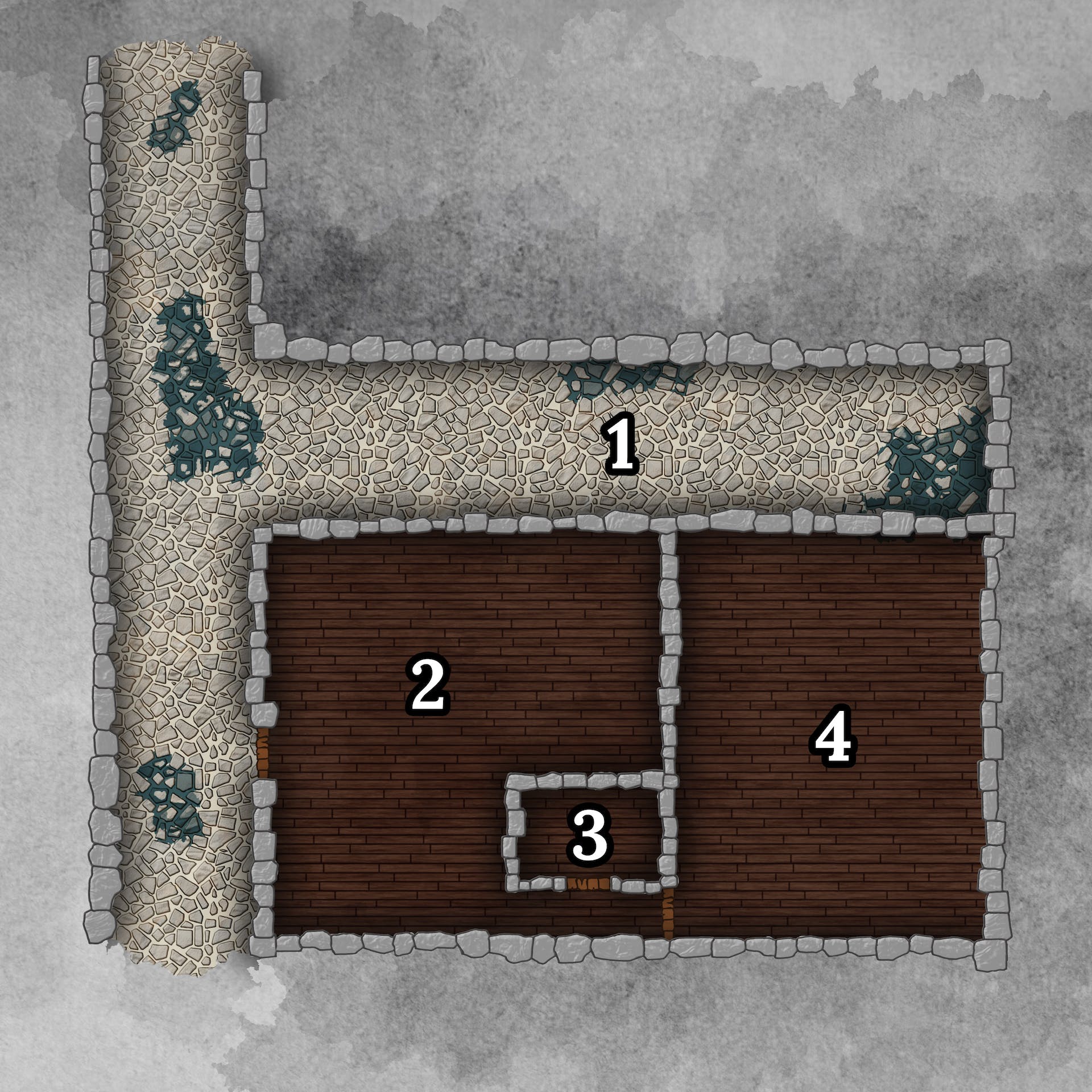 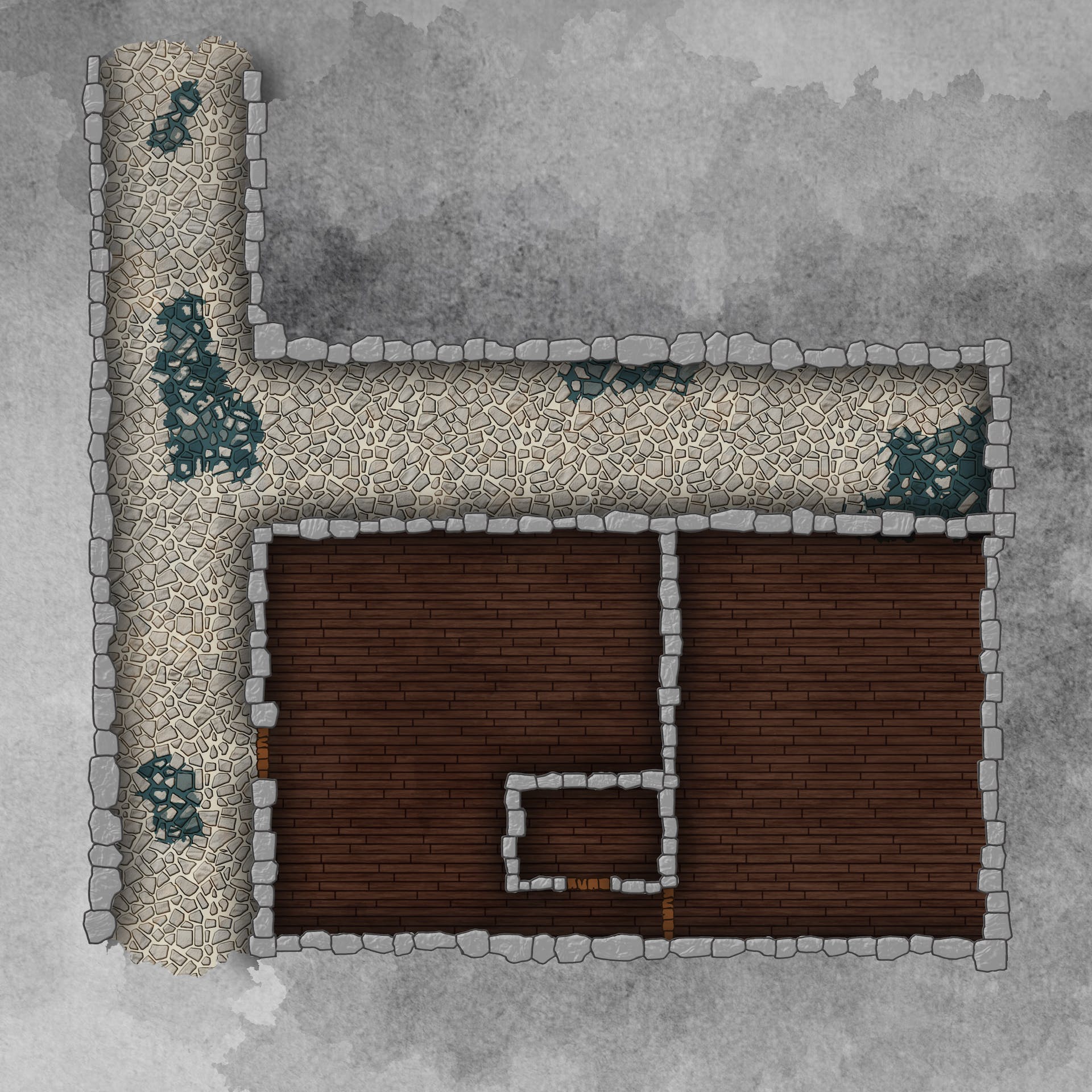 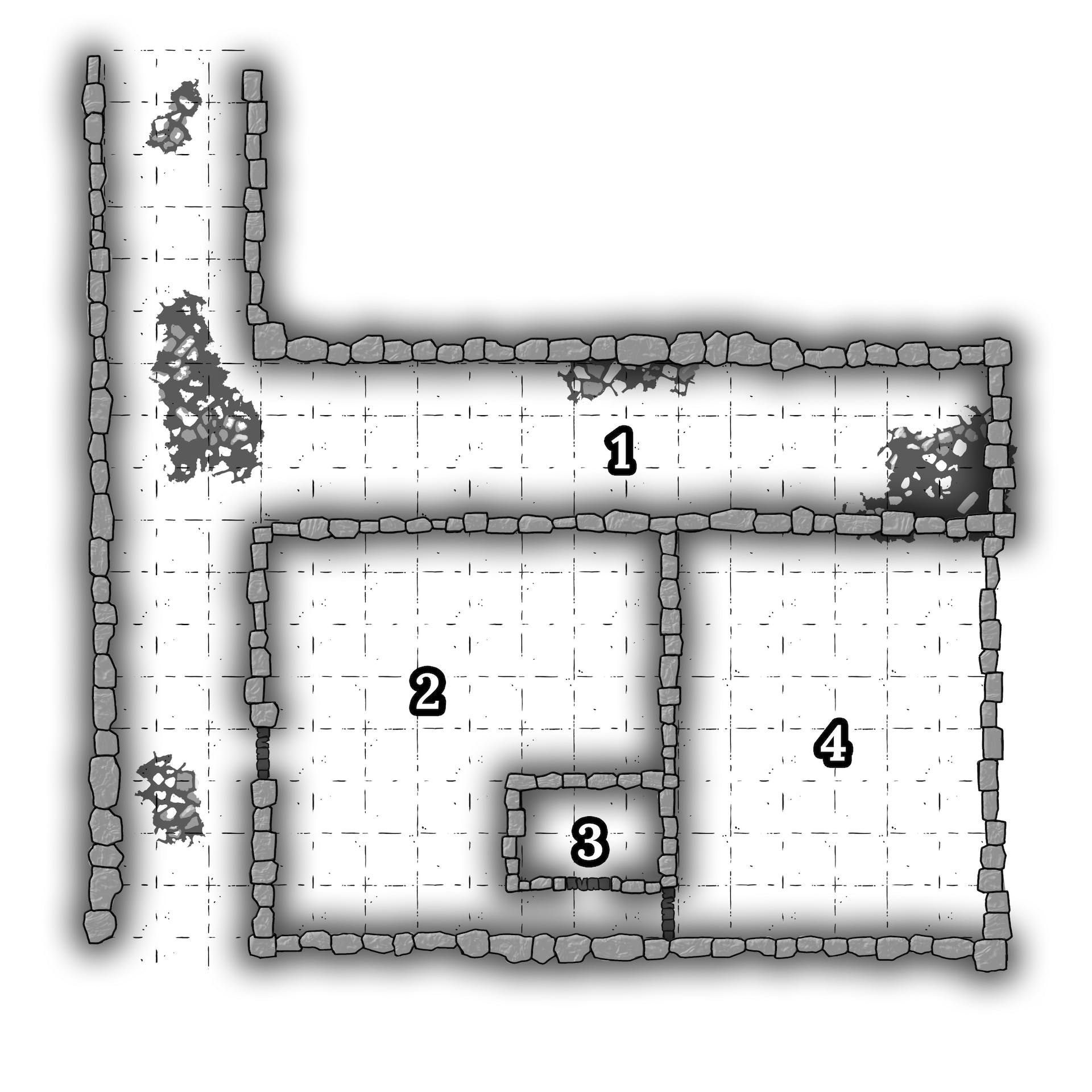 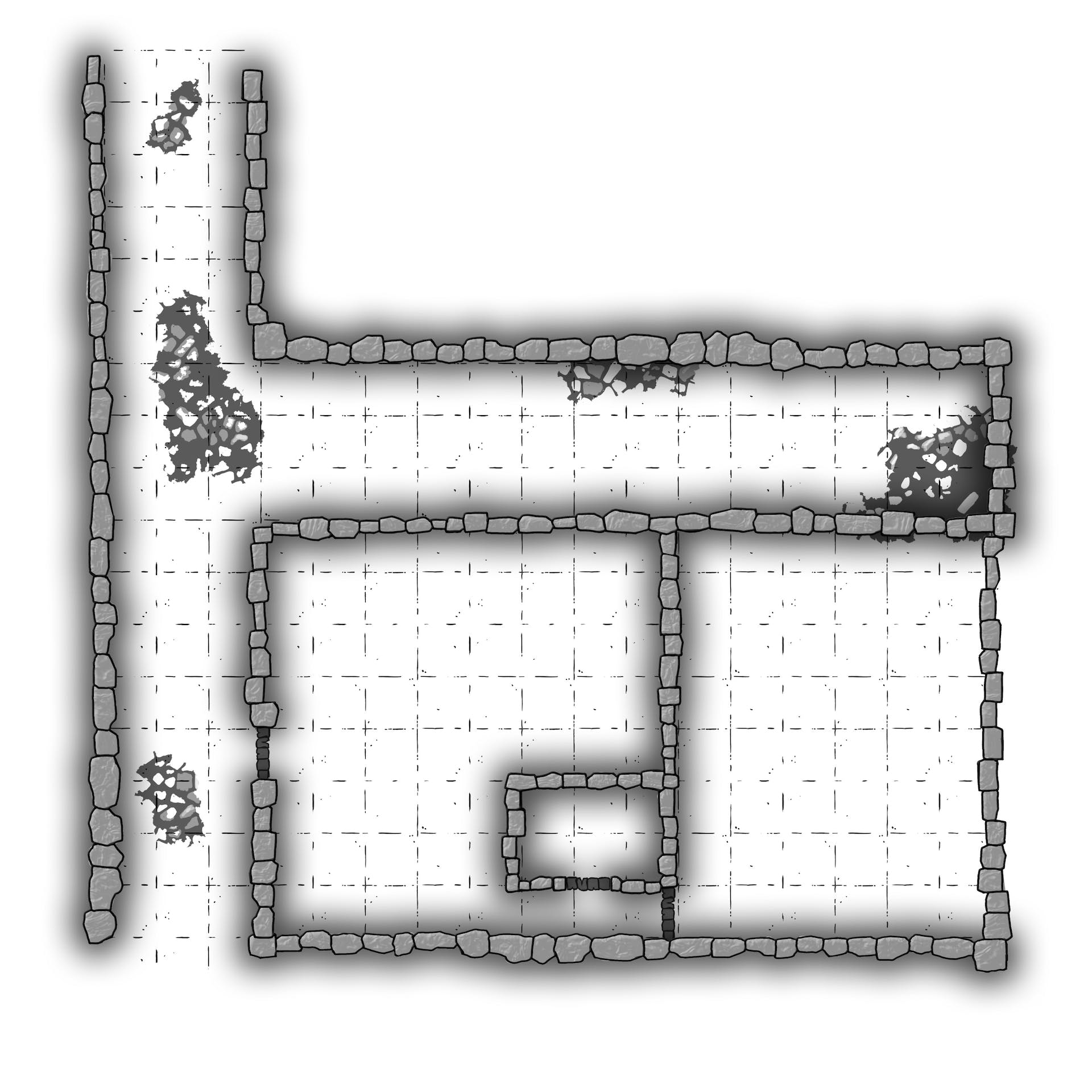 Wet cobblestone streets twist and turn through the city of Blutstrom.

Unless otherwise noted, locations along the cobblestone street have the following features.

Ceilings. Indoors, the ceilings are typically 8 feet high and composed of wood.

Floors and Walls. The streets are made of cobblestone and thick clay. Indoors, most buildings have wooden floors and walls.

Doors. All of the buildings’ doors are made of wood and have AC 15, 18 hit points, and immunity to poison and psychic damage. Opening or closing a door requires a successful DC 20 Strength (Athletics) check.

Light. Outdoors, there are no sources of light in this alleyway at night. Indoors, buildings have enough lanterns to provide dim light throughout each room.

Climate. The city streets are cool and damp. Indoors, the temperature is kept comfortable by fireplaces.

The following locations are keyed to the map Cobblestone Streets.

Characters may approach from the north or south. If the characters arrive during the day they can investigate the alleyway for clues. At night there is an encounter with a spry noble and dretches.

If the characters arrive during daylight hours, read the following:

Investigating the Alleyway. Waste is strewn across the alley in heaps. Characters must make an Intelligence (Investigation) or Intelligence (Nature) check to learn more about the alley. See the table below for results of this check.

If the characters arrive during the night, read the following:

Man at the corner. The man leering at the corner is a noble named Esmond Graye (LN male human spy). He shushes the characters as they approach. He is waiting for the creatures in the alley to find a paralyzing gem he left in the garbage so that he can capture one of them and sell it to a noblewoman that wants an exotic pet.

Encounter: Drunk Dretches. Three overstuffed dretches that have eaten too much and have disadvantage on ability checks and attack rolls. They are rifling through the garbage in the alleyway. If they are not interrupted, after 10 minutes one of them accidentally eats a paralyzing gem (see below) and becomes paralyzed. At this point Esmond attempts to capture one of them. The dretches are Surprised and attempt to flee through some loose stone in the wall of the butcher shop.

Loose Stone. If the dretches fail to escape, the characters discover loose stone in the wall of the butcher shop and patches of fur around it.

The butcher shop is a three-room facility with a stairwell leading to apartments above. When the characters enter the shop, read the following:

Butcher. The butcher is named Maria. She is in the shop during the day. She has a room full of butchered humanoid bodies in the apartments upstairs and is therefore reluctant to allow characters to scour the premises, dissembling about how she has customers to attend to. If pressed, she can inform the characters that every morning when she arrives to open the shop, the alleyway is littered with trash thrown everywhere.

Encounter: Giant Rat. At night, there is one giant rat lurking in this room. Its movement speed is halved due to a half-dozen rat traps that cling to its feet and fur. It lashes out at any creature that gets within 5 feet of it.

Mud Trail. Skirting the eastern edge of the room is a trail of mud leading from the wall adjacent to the alleyway to the stairwell. A DC 12 Intelligence (Investigation) check reveals several loose stones in the alley wall that could be pushed aside for a small creature to squeeze through. 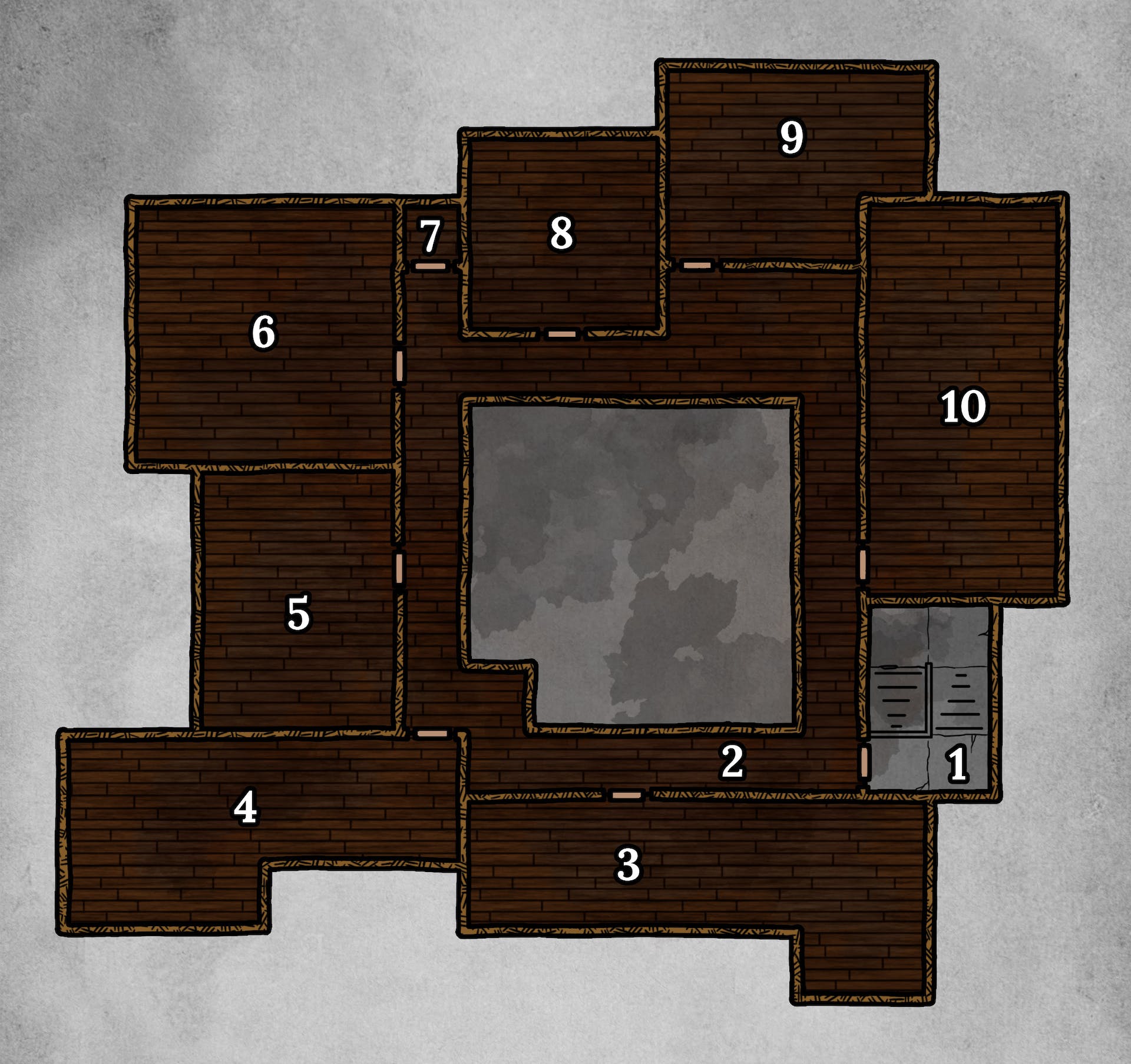 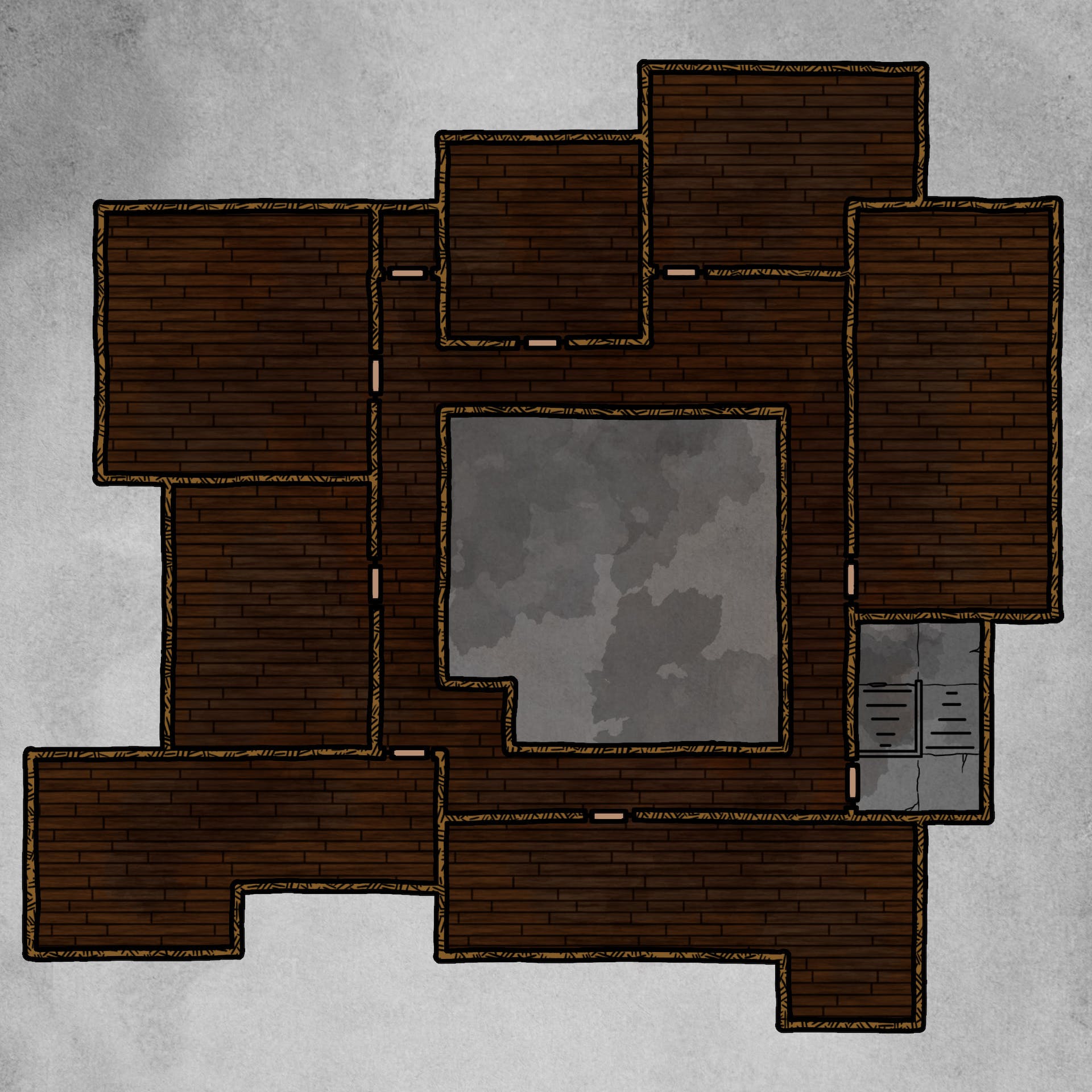 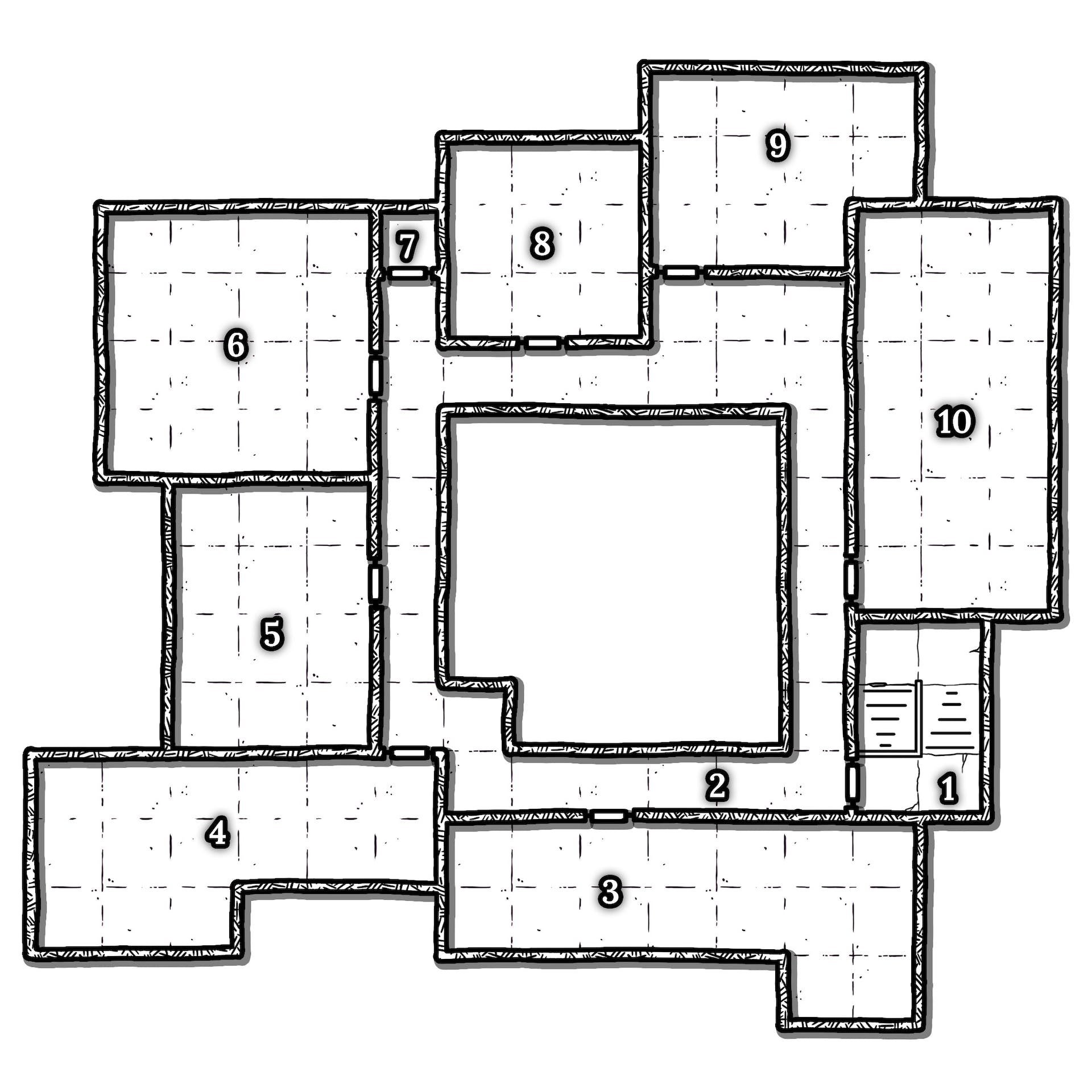 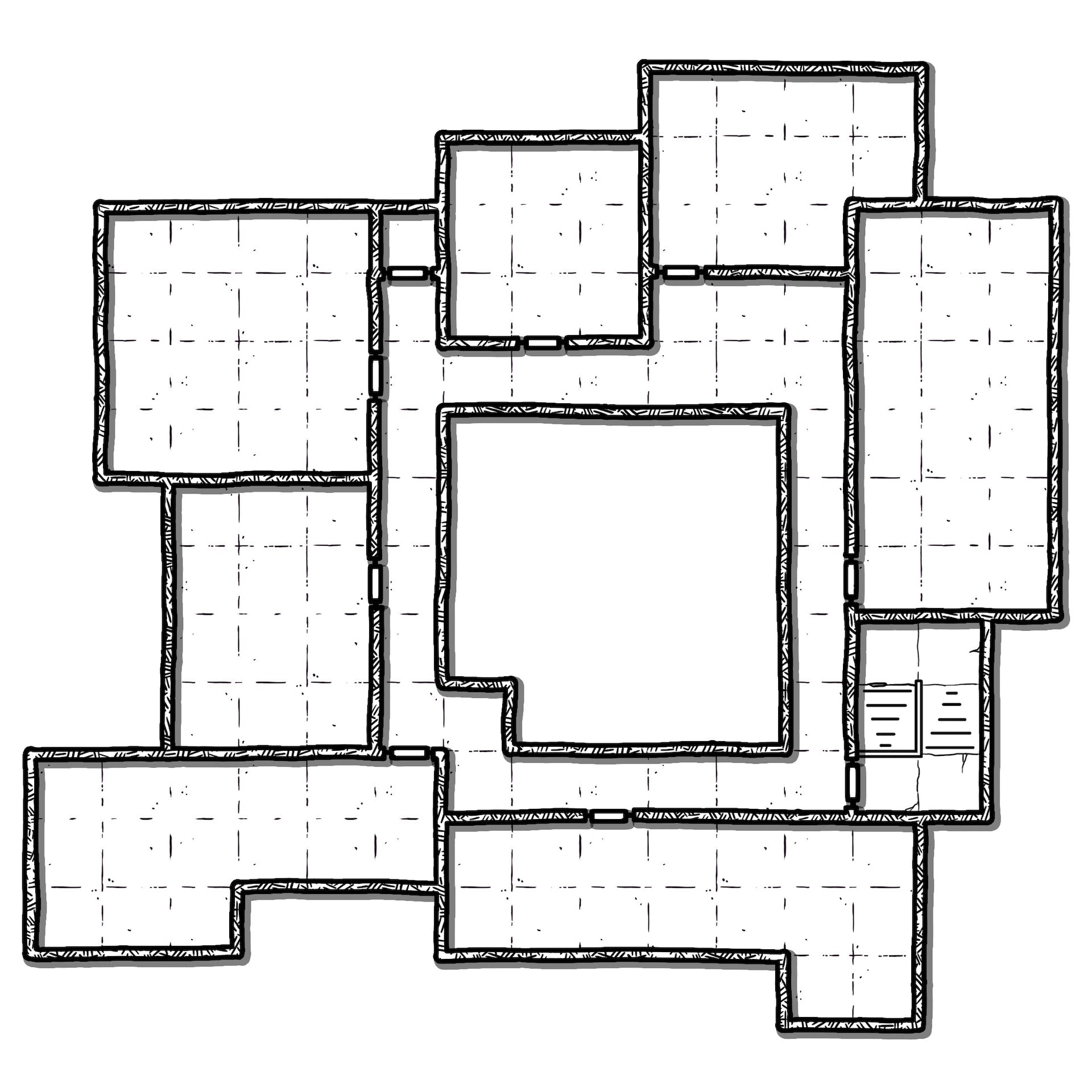 These old, worn down apartments are occupied by questionable tenants.

Unless otherwise noted, locations along the cobblestone street have the following features.

Ceilings. The ceilings are typically 8 feet high and composed of wood.

Floors and Walls. The apartments have worn wooden floors and walls that are clearly decaying.

Doors. The doors are made of wood and have AC 15, 18 hit points, and immunity to poison and psychic damage. Opening or closing a door requires a successful DC 18 Strength (Athletics) check or a successful DC 15 Dexterity check using proficiency in thieves’ tools.

Climate. The city streets are cool and damp. Indoors, the temperature is kept comfortable by fireplaces.

Light. Dim moonlight diffuses through the windows of the outer rooms.

The following locations are keyed to the Apartments map.

Hazard: Mold. Mold grows in dark recesses of the wooden walls, and one patch covers a 5-foot square. If touched, the mold ejects a cloud of spores that fill a 10-foot cube originating from the mold. Any creature in the area must succeed on a DC 10 Constitution saving throw or spend its action on its turn retching and reeling. Creatures that don’t need to breathe or are immune to poison automatically succeed on this saving throw.

Encounter: Stirges. There are two stirges hanging from the ceiling. They do not attack unless a character walks into the room.

Encounter: Gnoll and Dretch. There is one dretch and one overstuffed gnoll that has disadvantage on ability checks and attack rolls. When the characters enter the room the gnoll rolls around and demands more food while the dretch attempts to pat the characters down in search of snacks, attacking if it finds none.

This room is used by the butcher as a discrete meat locker for more controversial meats.

Encounter: Maria the Butcher. Maria is a chaotic evil human thug with the following changes:

Bodies. If the characters look closer at the bodies, read the following:

Leather Sacks. A character that opens the leather sacks discovers that they are filled with guts.

Characters can see and hear the door handle rattling meekly.

Encounter: Dretch. A dretch is trapped inside of this closet. Through the door they attempt to bribe the characters with an origami flower to be let out.

If the characters let the dretch out peacefully, read the following:

Trap: Paper Bag. When a creature picks up the paper bag it triggers a glyph of warding that casts stinking cloud (DC 12).

Encounter: Dretches. There are two dretches holding a cat. They ask the characters which one of them should get to eat the cat. If the characters choose a dretch, the chosen dretch yanks the cat and begins eating it alive, scarfing it down in one round. The other dretch attacks the characters.

Barrel. When a creature moves within 10 feet of the barrel, a sharp hiss emits from within it. A DC 12 Wisdom (Survival) check reveals that it’s from a snake.

At the end of the adventure the characters have dealt with an infestation of dretches, a gnoll, and a butcher with questionable relationships.

Exotic Pet. If the characters provide a living, breathing dretch to the noblewoman she pays them the 100 gp offered. She will pay 50 gp for each additional dretch.

Noise Complaints. The group of neighbors are horrified to learn what the source of the disruption was and eagerly pay the characters for their trouble.

Questionable Meat. Brandar Starglade III is horrified, but also deeply vindicated by the news that the butcher was using humanoid meat. He pays the characters for their trouble.