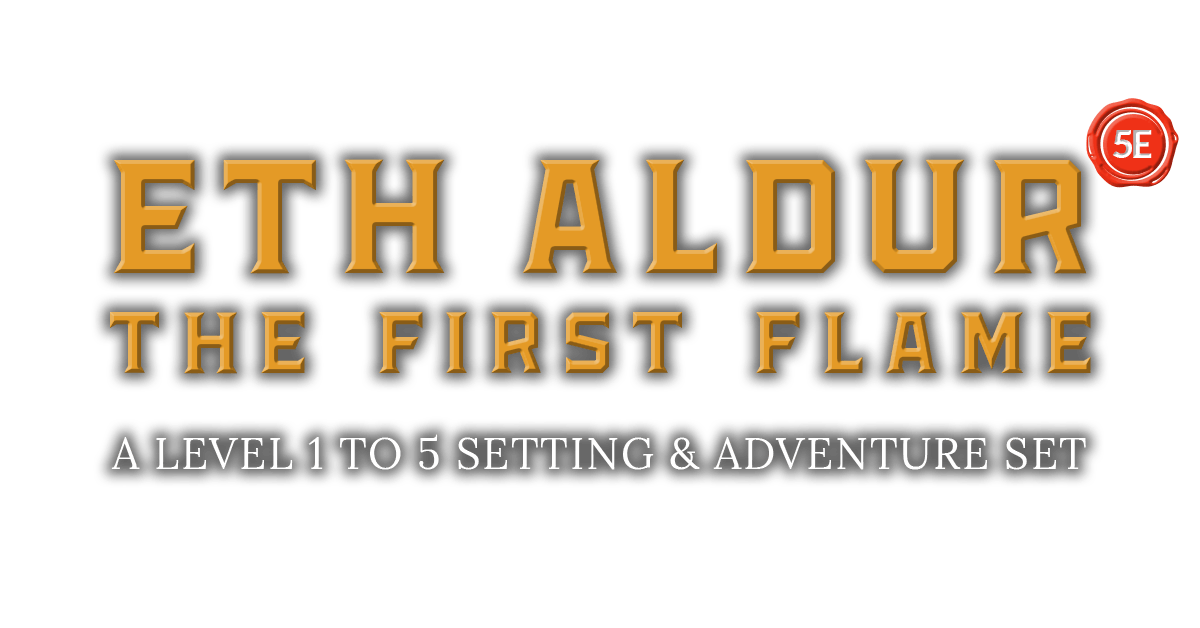 Explore Eth Aldur, the dwarven city of magma, in this 5th Edition supplement with a robust city, 6 adventures designed to take characters from level 1 to 5, and a variety of NPCs, monsters, and encounters.

Eth Aldur — the City of Magma. This dwarven city is carved into the perimeter of a vertical shaft over a cauldron of magma. The denizens of the city are expert metalworkers, miners, and explorers of the underearth.

The city of Eth Aldur was founded by a lone dwarven traveler that heeded a divine mandate to journey deep into the unknown reaches of the underearth and found a new home. They followed the paths carved out by vast chasms and bubbling veins of magma. Eventually, many hundreds of miles from the kingdoms they left behind, they found the caves promised by their god: a vast vertical shaft in the earth over a dormant magma pool.

The traveler, known only as the “first flame,” spent the remainder of their life dutifully carving out the foundations of Eth Aldur. As the first flame lay dying, new clans folk arrived at the city, similarly called by divine mandate to make the journey. They inherited the foundation prepared by the first flame and continued the work of building a life here.

Over the millennia, the magma beneath the city has risen, pushing the city’s inhabitants higher into the caves as the lower sections are melted and consumed. At the same time, the city’s influence has flowed throughout the catacombs of the underearth, crystallizing in a multitude of neighboring towns, hamlets, and outposts in the surrounding region. 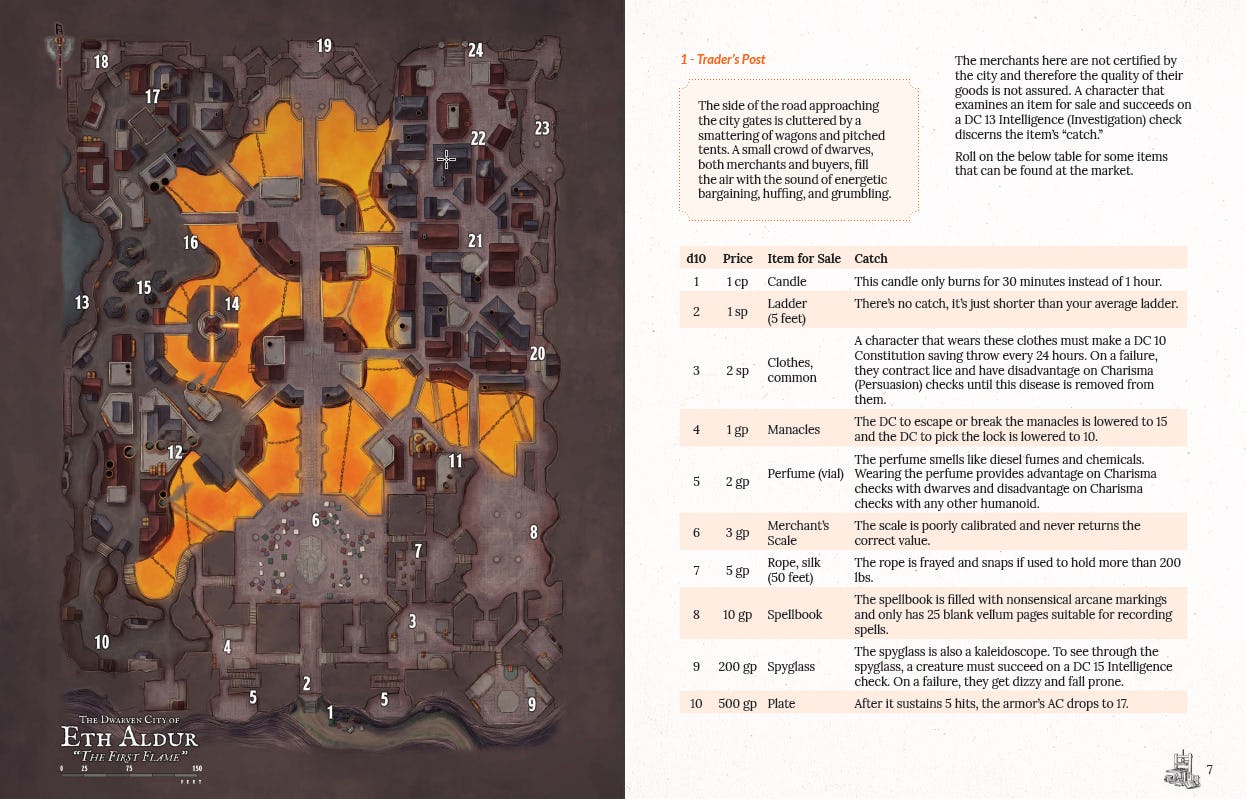 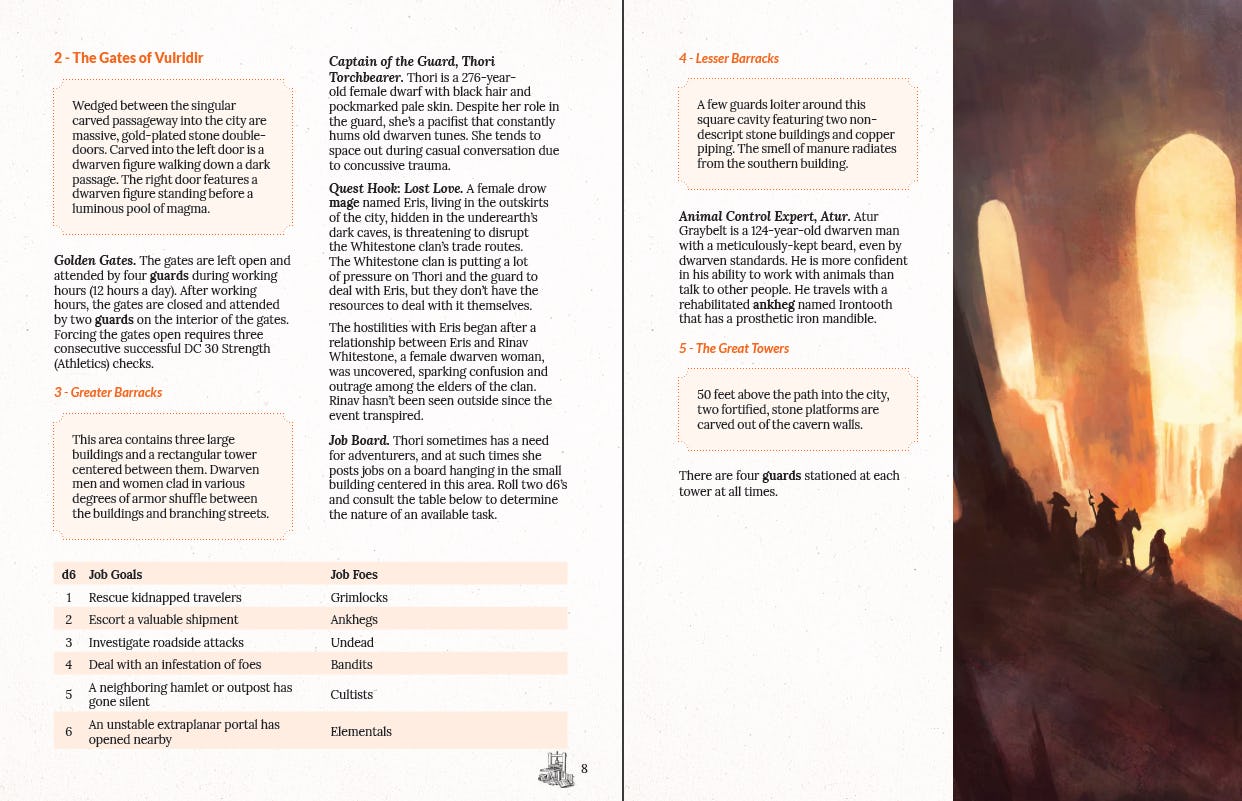 The following adventures expound on the quest hooks presented in the setting supplement.

Check it out here!

Opal wants to learn more about their creator, a reclusive wizard that came to Eth Aldur from the outskirts of the city before forfeiting their life to create Opal. They want the characters to join them on an expedition to find and investigate where their creator came from.

The post office has received a mysterious package with destined for a drow oracle named Talice Rhomduil that lives deep within the caves of the Underearth. The route to Talice is dangerous and the couriers are looking to outsource the job to adventurers.

Duraina Whitestone, heir of one of the powerful merchants here, lost a valuable family heirloom — a gem-encrusted signet ring — in a drunken bet with one of their family’s connections: a vampire named Alianor Drake. Duriana wants the characters to go to sneak into the vampire’s estate and steal the signet ring back.

A female drow mage named Eris, living in the outskirts of the city, hidden in the underearth’s dark caves, is threatening to disrupt the Whitestone clan’s trade routes. The Whitestone clan is putting a lot of pressure on Thori and the guard to deal with Eris, but they don’t have the resources to deal with it themselves.

The hostilities with Eris began after a relationship between Eris and Rinav Whitestone, a female dwarven woman, was uncovered, sparking confusion and outrage among the elders of the clan. Rinav hasn’t been seen outside since the event transpired.

The Firewater Brewery is preparing to host a large event for the three clans. With one week before the event, there is little room for error. Unfortunately, a great deal of their kegs were sabotaged and the remainder stolen. To have any hope of salvaging the event, Fari needs the characters, whom they consider a viable neutral party, to find the stolen kegs.

If the characters have completed all of the other available quests, the reigning queen requests an audience with them.

The city’s miners broke into an unexplored cavity in the ground and discovered ancient fire giant ruins. The miners explored briefly before they heard a terrifying screech and fled. They have laid plans to collapse the tunnel if necessary, but the queen would rather entice the characters to explore the ruins and report back their findings.

What lays within the ruins may shake the very foundation of Eth Aldur.